Yesterday, we stopped over at Scott Firefighter Combat Challenge event when it came to our home town here in Lexington, KY. In case you don't know what this is it's an event that is shown on ESPN that shows the public the physical rigors of our jobs. We know that dragging a fully charged 2 1/2 inch hoseline is hard - but does your neighbors know it? Probably not. They just don't have that frame of reference.

The Firefighter Combat Challenge is for the public to know they physical exertion required when firefighter's perform the job. It's also a competition. There isn't another demographic of people that I know that are more competitive than firefighters. We are the only breed of individuals that can take a simple task and make it into a competition. Who can pull the most of anything? Who can lift the most? Do the most? It's all fun and games to us though. With this competition and display, firefighters get to compete as well as display the rigors of our job to the public. We win (and we will win), and the public wins (but really we win).

This is called the toughest two minutes in sports. The Challenge seeks to encourage firefighter fitness and demonstrate the profession's rigors to the public. Wearing "full bunker gear" and the SCOTT Air-Pak breathing apparatus, pairs of competitors race head-to-head as they simulate the physical demands of real-life firefighting by performing a linked series of five tasks including climbing the 5-story tower, hoisting, chopping, dragging hoses and rescuing a life-sized, 175 lb. "victim" as they race against themselves, their opponent and the clock.

It requires us to be really physically fit. Some of us are not. We all know that cardiovascular incidents (heart attacks) are the biggest killers of firefighters. It's not fire, it's not the vehicle accidents, it's heart attacks. For the longest time, the fire service was resistant to being "in-shape". We have no need to be in the shape of an athlete because we fight fire. We put wet stuff on hot stuff. But really is that all we do? It's not.

In recent years after the initiatives were put in place to get firefighters in shape - improvements have been made and some of us have jump on the health train. Our job, to do it effectively, really requires that we are in shape. I can remember times when I have been on a fire and when things really got rough and it took a lot of time to knock the fire down, I was done. I was tired and just ran out of juice. What good was I then? I was useless. My team needed me and I was ready to play a non physical role. If there were victims, (which is not the case) , in this incident I couldn't really have helped. I am sure all of us have been there at some point. My point is that we are required to fight the fight as long as the fire is putting up a fight. Can you do this?

Guys (and gals), it's time to get on the health train. I for one am not the most physically fit person in the world, but for those of you in the same boat as that, and who want to continue to be a firefighter, for your own safety - make it a priority to eat healthier. Again - this is not the "pot calling the kettle black". I too have room for improvement. Not only does your job expect you to do the things we have to do, but any potential victim does, and your family expects you to come home at the end of the night.

These guys and gals yesterday displayed exemplary physical fitness this weekend. The event included volunteers from The Kentucky Fire Commission, The Lexington KY Division Of Fire & Emergency Services, The IAFF Local 526 and other organizations throughout Kentucky. The professionalism displayed by the personnel from these agencies was supurb. These people are some of the absolute finest in the country. The event was perfect with some great weather and I commend everyone who pulled it off.

The Scott Firefighter Combat Challenge travels the country to demonstrate the physical demands that the public does not know we must endure. The question is - can you?

Posted by The Public Safety Store at 3:54 PM 1 comment: 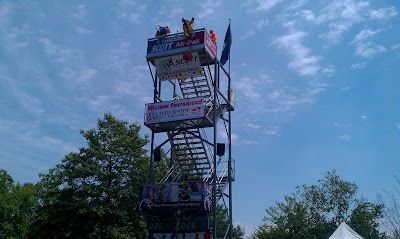 Published with Blogger-droid v1.7.4
Posted by The Public Safety Store at 1:37 PM No comments:

We have been informed that there are some new advancements coming in the tune of new LED lightbars from Sound Off Signal. SoundOff Signal has been developing new innovations in technology in the warning light industry for over 30 years. They invented the headlight flasher or the wig-wag as we know it today.

Soon we'll be stocking the latest invention from SoundOff Signal - The Soundoff APEX LED Lightbar as well as the SoundOff SkyFire LED Lightbar . Both items have some features that are going to offer a feature set and price point that will be very competitive.

Check out our product pages for each of these lightbars. The APEX lightbar is going to save you and your agency money on gas mileage. It's designed so that it has the lowest wind resistance possible. It's very aerodynamic. Less friction with the wind means more gas mileage for you. Even when prices were low this bar can save all of us money in fuel. Bottom line - the lower wind resistance your LED lightbar gives - the more it affects your bottom lline.

The Skyfire lightbar is dedicated to towing companies and wrecker operators a high quality product at a price that really helps out on the budget. We aren't going to release pricing information yet as it is NOT finalized, but we can say that it is going to be a price point not seen in the a LED lightbar of this quality. Plus - another great thing about this bar is that it's going to be very modular. Add as little to the bar as you need and save money or add as much to the lightbar that you want to get a fully customizable LED lightbar. It's really going

Posted by The Public Safety Store at 3:12 PM No comments:

LED Flashlights On The Way - BRIGHT!

We have new flashlights on the way from Nebo tools. You have to checkout the new high power Redline LED flashlight. This thing is great! It's over 200 lumens and really is a super bright.

Check out our LED Flashlights NOW!

Posted by The Public Safety Store at 5:15 PM 4 comments: